Starting his woodworking career in a Connecticut boat works at the age of 10, under the tutelage of craftsmen– some of whom had come up working and sailing square-rigged ships in the late 19th Century – Michael Millard brings a unique perspective and set of skills to the task of building of individual instruments for individual musicians.

In 1970, Michael built his first Froggy Bottom Guitar in his apartment on New York’s Lower East Side. He bent the guitar’s sides on the ‘hot pipe’ – a heat riser running through his kitchen to the floors above.

From the very beginning 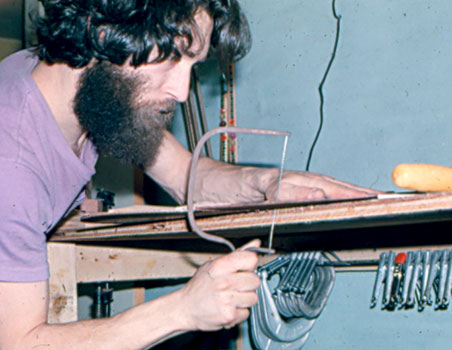 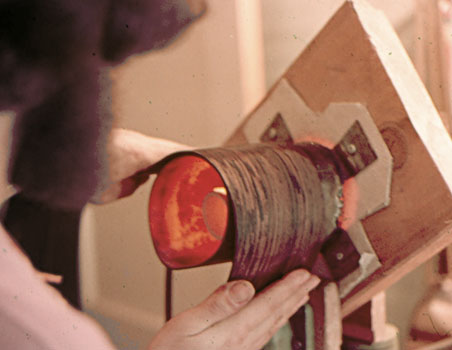 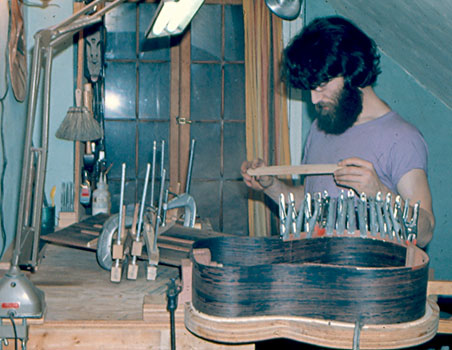 Slides shot in 1974 by Rick Hege in Michael’s shop in Richmond, NH

In October of 1970, Michael had begun working at Gurian Guitars on Grand Street in New York City. Gurian had learned the free form craft of building classical guitars without confining jigs or forms from luthiers Gene Clark, David Rubio, and Manuel Velazquez. Gurian adapted these techniques to build steel string guitars. Michael’s skills and perspective on craftsmanship – gifts from from his mentors in the boat yard – were a good fit for Gurian’s classical free form building method and aesthetic.
Michael’s first two Froggy Bottom Guitars were essentially Gurian shapes with significant adjustments: a lighter and different bracing pattern for the top and – what has become a Froggy Bottom trademark – high, thin, and highly arched back braces, which produced two lively and active plates for the instruments.

“Every Froggy Bottom I made after that,” Michael says, “has always been my own work.”

In 1973, Michael moved with the Gurian shop to New Hampshire.

For fifteen of those years, Michael was spending about half his time as a working musician. Orders came to him by word of mouth, as well as through personal contact with other players.

Michael quickly came to value the personal interaction with players who had different needs and desires for their guitars. From the very beginning he enjoyed working with players who took each guitar for what it did best and played to its strengths.

The flexibility of Gurian’s adapted classical construction techniques allowed Michael to be more responsive to the hopes and desire of his friends and customers in the design and fabrication of their guitars.

Over time, the combination of his close interaction with players and this free building process allowed Michael to correlate specific characteristics of guitar design, materials, and construction with their effects on the function and voice of the instrument.

In 1994, as Michael was considering adding a CNC machine (a Computer Numerical Controlled router) to his shop, Andy Mueller joined Froggy Bottom Guitars. Andy brought a wealth of experience working with similar machines from his background of making high speed wide-format, IMAX-type motion picture cameras with his dad.

Andy and Michael built Froggy Bottom Guitars together for fourteen years. Andy left the shop to pursue work as a classroom teacher for a few years, but he’s back.

“Our methodology, our mission as guitar builders, and our determination to remain personally connected to each guitar– all conspire perfectly to limit the number of guitars that come out of the shop.” 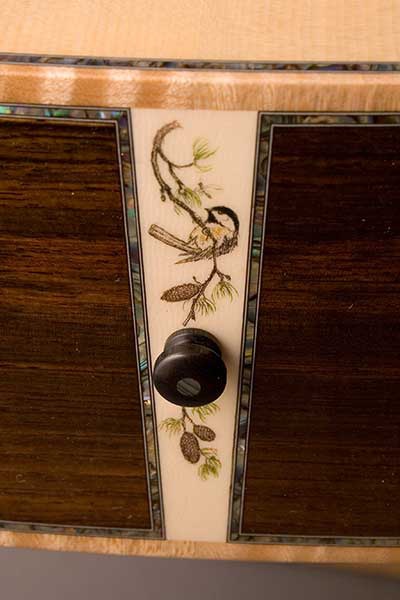 For over twenty-five years, we offered Petria Mitchell’s custom engraved heelcaps and endgrafts as a way of personalizing these guitars.  Petria will once again create custom heelcaps exclusively for our 50th Anniversary guitars.

In 2010, for our  Fortieth Anniversary guitars, we began working with highly regarded engraver Glenn Carson. Each piece of Glenn’s work is unique and done to order and is painstakingly married to the instrument by hand. 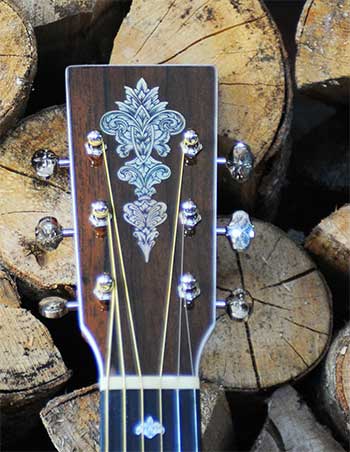 As we enter our fiftieth year of Froggy Bottom, our six-person team remains dedicated to tailoring every aspect of each guitar’s function, sound, and appearance to the needs and desires of a particular player.  Each facet of construction, decoration, finish, and playability is accomplished by different members of the Froggy Bottom team. Every member of the team has built guitars from start to finish; all are capable of performing every task involved in the construction of a fine guitar.

The goal of the company remains to build instruments that are capable of responding to and exceeding the functional needs and desires of individual players, and to provide guitars that spur the imagination and music of their owners.