To begin, in October, 2009,  I spent six hours in the Froggy Bottom shop with Michael Millard and my handy little Zoom digital recorder. I was asking questions and soliciting memories of Michael’s first experiences working in wood. Here is how we began:

SA: “I’m curious about you and wood…the early end of this, age ten, eleven, twelve in the boat yard?”

MM: “They’re all gone. And most of them were gone a long time ago. There were three people who were – no pun intended – instrumental in all this.

“The most important one was Tony Miller. It was his son, John Miller, who brought me to the guitar very early on and who became my brother-in-law. I was working with him in a boat yard, Stormy Boatworks in Branford, CT. We were each working on our family’s boats and John’s dad was Carlton Miller, better known to his friends and family as Tony.

“Tony was revered. People sort of walked lightly around him. He was a temperamental guy, very opinionated. He built some boats. I think he built some airplanes. He was a real craftsman.

“I had sort of come into the boat yard privately where I would be working on the family boat and people would come in and say, “Hey, you want to do that for me?” So, I was working for pay in the yard when I was 12 years old. 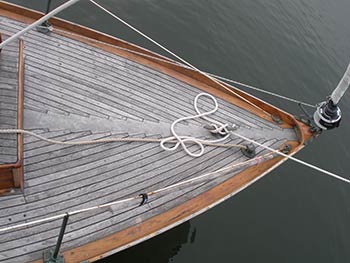 “It was 1959 and fiberglass was all the rage. It was the coming thing.  There were a couple of high school kids and a few college kids that were summertime help – and me. All the kids wanted to work on the cool stuff:  “Oh, I want to work on the fiberglass.” So, my first day of working in the boat yard, I was put underneath this hull with a great big I-don’t-know-how-many-horse power electric hand drill, drilling holes up through the hull and having all this incredibly fine fiberglass dust pouring down on me. The joke in the shop was they called it the ‘seven year itch,’ cause it lasted forever. It was just miserable.

“I hated fiberglass. It was ugly. It was detestable. And I was surrounded in my family and friends, my circle of people, the Miller family and the Millard family, who didn’t want anything to do with fiberglass. I mean fiberglass has its place: it makes great Corvettes.

“There were two guys who were the old-timers in the yard. One of them was Joe Wagner and I can’t remember the other guy’s name for the life of me. I can see him clear as a bell.

“Joe was around 82 when I met him. And these two guys grew up sailing on square rig boats as young men – (square-rig ships…he’d shoot me if I said ‘boats’). And they were taught to work in an environment which was ‘free-form’, you learned to fit things together without all the jigs and fixtures that modern people were trying to use to cut costs and standardize products. They knew how to work wood. They really knew how to work wood.

“And shortly thereafter, there was a job where Joe needed one of the young guys to help him. He surveyed the crew and said, ‘I want him,’ because he knew I liked wood.  That was the beginning. . .” 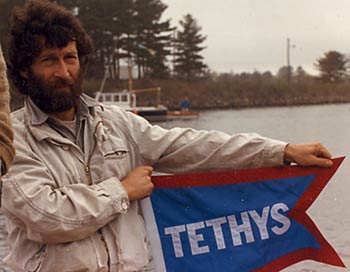 The entire article is available through the Fretboard Journal, a fine-art quarterly dedicated to guitars, instrument builders and players. The Fall 2010 issue with the article on Michael and Froggy Bottom Guitars is available at finer bookstores and newstands or through:  http://www.fretboardjournal.com.

The boat featured in these photographs is Tethys, and belonged to Michael’s father, Peter Millard.  Tethys has found its way into the hands of Michael’s dear friends, Jim and Susan.  Susan plays a Froggy Model M made for her in the 1970s.