The flagship of the Home Fleet of the British navy from 1907-1917 was the HMS Dreadnought, an 18,110-ton battleship with an “all-big-gun” main battery (ten twelve-inch guns) and a steam turbine powerplant. With her 21-knot maximum speed and impressive battery, the Dreadnought (“fear nothing”) so thoroughly eclipsed earlier designs that subsequent battleships were commonly known as “dreadnoughts.” 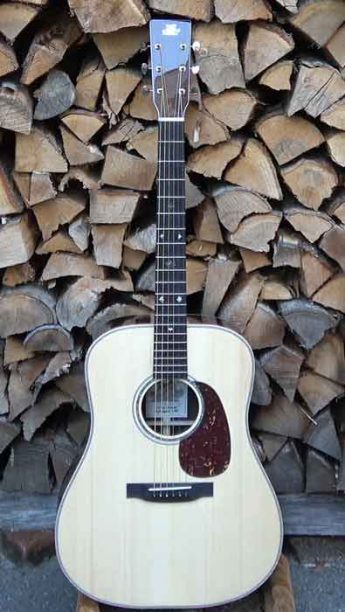 One dreadnought to cover everything…

If a person wanted one dreadnought to cover everything, this would do it. You can flat pick the hell out of it, or play soft finger-style. I flat pick exclusively, but my original instrumentals and arrangements tend to sound more like I was finger picking. I use the open strings to add that “ring” and sustain while playing the melodies. The D Model is great for that.

These prices reflect only the basic grade and wood choices for this model. Our price list has prices for specific custom options. Our current prices, effective January 2020, are subject to change without notice.