“One afternoon in 1968,” as Michael tells it, “I watched a drunken sailor with a pillow case slung over his shoulder stagger into a pawn shop in New London, CT. Since the bag on his shoulder was very guitar-like, as soon as he emerged counting his money, I went into the shop to see what he’d sold. After twenty minutes of bickering, I emerged with a very well worn, twenty year old Gibson SJ.”

Gibson’s Southerner Jumbo was made famous by country music icon Hank Williams Sr. Early models of these short scale, round-shouldered dreadnoughts are sought after and in recent years have become extremely popular, and their value has soared.

Over the years Froggy Bottom has built specially commissioned SJ-style guitars, but in 2008 the SJ was established as one of our formal models. In 2010 the SJ has become our most popular full-sized guitar, matching the H-12 in popularity.

As we built the SJ prototype, we also built a photo blog where you can see this guitar in process from start to finish: Model SJ Blog Revisited.

And what happened to that sailor’s guitar?

“As I already had a guitar I loved, the SJ was only around for a couple of months, but almost as soon as I’d sold it to a friend,” Michael says, “I was sorry.

“Forty years later, my friend still has that guitar, and it is still one of the very best guitars I have ever known.” 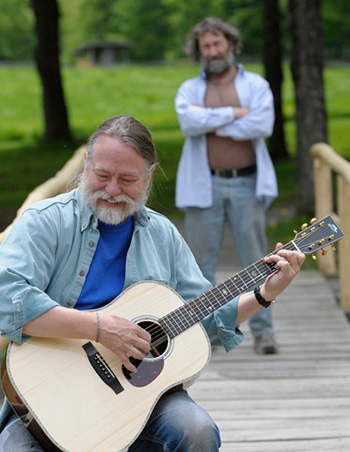 Every guitar I ever wanted

“The new SJ that Michael made for me is every guitar I have ever wanted, needed or played–all rolled into one! Each day, it never ceases to project:  dark, light, with a flatpick, with fingers. There is no tonal shade it doesn’t cover. It’s totally crazy. And I mean that in the best possible way.”

These prices reflect only the basic grade and wood choices for this model. Our price list has prices for specific custom options. Our current prices, effective January 2020, are subject to change without notice.