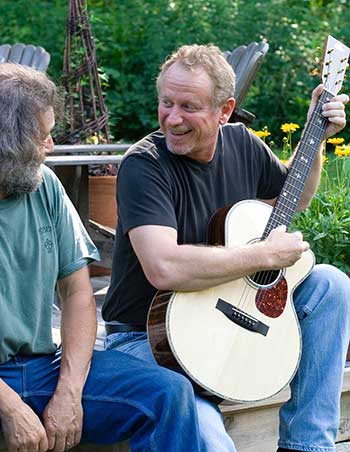 Since starting Froggy Bottom Guitars with the construction of my first guitar in 1970, we have strictly avoided celebrity endorsements. One need only look around the world of acoustic guitars to realize that instrument making companies circle famous players like vultures in search of possibilities to get the latest guitar hero to hang his or her name around another so-called signature instrument. It’s a game we do not play.

For years around the shop, we joked that, “When the King leaves the building, He takes His Froggy Bottom with Him”. (Needless to say, Elvis did NOT play a Froggy.)

The message was clear: we wanted our success to be driven by our instruments. We wanted to rest in the assurance that anyone who is playing a Froggy Bottom guitar is doing so because it is their guitar of choice – and decidedly not because the company was happy to ship him a selection of free instruments a week before the latest tour hit the road.

We have an impressive list of players, famous and otherwise, for whom we have built guitars, but we do not advertise them. We understand that most of you have your own needs in your guitars, and we do our very best to address your needs on your personal terms. Any serious player deserves better than to be simply handed someone else’s guitar.

We still feel this way. And that highlights the exception we made to the rule.

In the Spring of 2014, we introduced a Will Ackerman Signature Model Froggy Bottom Guitar.

There are two things I have to cite about this exception.

First, the depth and scope of Will’s impact on the world of the guitar is universally acknowledged. As a player, a producer, and an engineer of acoustic music, there is simply no other individual who has ever had the impact on the listening public regarding the acoustic guitar which Will has. His work recording the acoustic guitar for his Windham Hill label with Michael Hedges, Alex DeGrassi, himself, and countless others literally established the modern standard for the sound of these instruments. Virtually anyone studying how to achieve excellent acoustic guitar sound has studied Will’s work thoroughly. He is a master.

Over the last several decades we have built many guitars for Will, and while he loves guitars broadly, ours remain his instruments of choice. His enthusiastic appreciation for the guitars we’ve built for him has been so great that at times it’s been almost embarrassing. There are few people with the integrity, musical taste, and skill of Will Ackerman. For him to choose our work over all the guitars available to him is deeply satisfying to us. It is an honor we are proud to return. 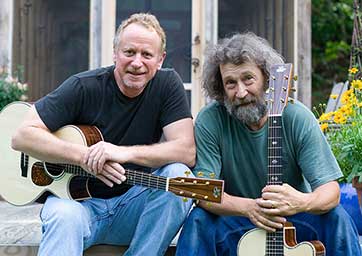 The second is simply about friendship. This is personal. Will and I have been the closest of friends for a very long time. While we certainly spend our share of time dealing with guitars, this is about friendship.

In 2004, Will won a Grammy for his CD “Returning”. A revisitation of his life’s work, this recording was essentially a “greatest hits” project. But it was done with the clear intention of having the compositions sound as Will had originally envisioned them sonically. In spite of the universal acclaim they received in their original recorded form, the difference, Will maintained, was that he finally had the guitar which gave him the voice he heard in his heart and mind.

It was a Froggy Bottom Guitar.

With all this clearly in mind, we are proud to offer our Will Ackerman Signature Model K:

These are available only as directly comissioned guitars.
Call Michael at  802 763-0100.

Each instrument will be accompanied by a personal letter of authenticity to the purchaser, signed by both Will and myself, and I will build each instrument myself.

Here’s Will and Michael talking at the unveiling of  the first William Ackerman Signature Model in 2015: